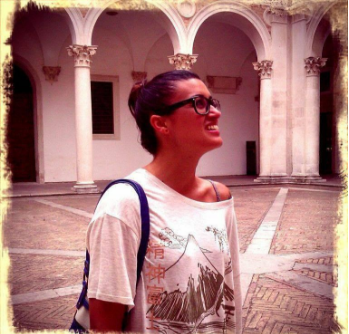 Eleonora’s dissertation “Spectacular Capitalist City. Wanderings through Rome from 1870 to the Present” analyzes modern and contemporary Italian cultural production that highlights the city’s singular role in forging Italian national identity through monuments and urban plans. The texts under consideration reveal that the Italian state’s at times frantic, superficial, and spectacular modifications to Rome’s urban structure reveal the nation’s frustration with its perceived “backwardness” or “belatedness” with regard to European modernity. Moreover, these works elucidate the subjective effects of urbanization and consumer capitalist economy in ways that are otherwise difficult to obtain through social scientific disciplines. This dissertation, therefore, contributes not only to Italian Studies, but also to a broader discourse on global literature and film studies that intersects with urban studies, history, sociology, etc.

In this work, Eleonora combines close textual analysis of literature and films with the study of archival documents and a number of critical and theoretical works on the intersection between film theory and urban studies; urban modernity and mass culture; biopolitics and space; and language, identity, and architecture. Guiding her overall analysis are the philosophical works of Pasolini and Heidegger on poetics and dwelling. This approach allows her to introduce new readings of prominent and lesser-known Italian writers and filmmakers from D’Annunzio, Serao, Pasolini, Morante, and Fellini to Celestini and Sorrentino (to name a few) by exposing the connections in their respective works between urban space, national identity, and consumerism in Rome during key moments of nation building: the designation of Rome as the capital in 1870, the fascist regime, World War II and its aftermath, and contemporary crises linked to globalization. Beyond illustrating the annihilating character of the urban transformation and the imposition of a consumer capitalist economy in Rome, this dissertation shows how the literary and cinematic works taken into consideration reveal alternative escapes from these strangling jaws. Flânerie, playful interactions with ruins, youthful figures discovering the city for the first time, and the creation of poetry and the adoption of a poetical point of view on the world represent various modalities through which the authors and directors included in this research attempt to challenge and subvert an authoritative, homogenizing society by showing that the figurative and literal cracks in the system can become sites of an alternative dwelling in the world.